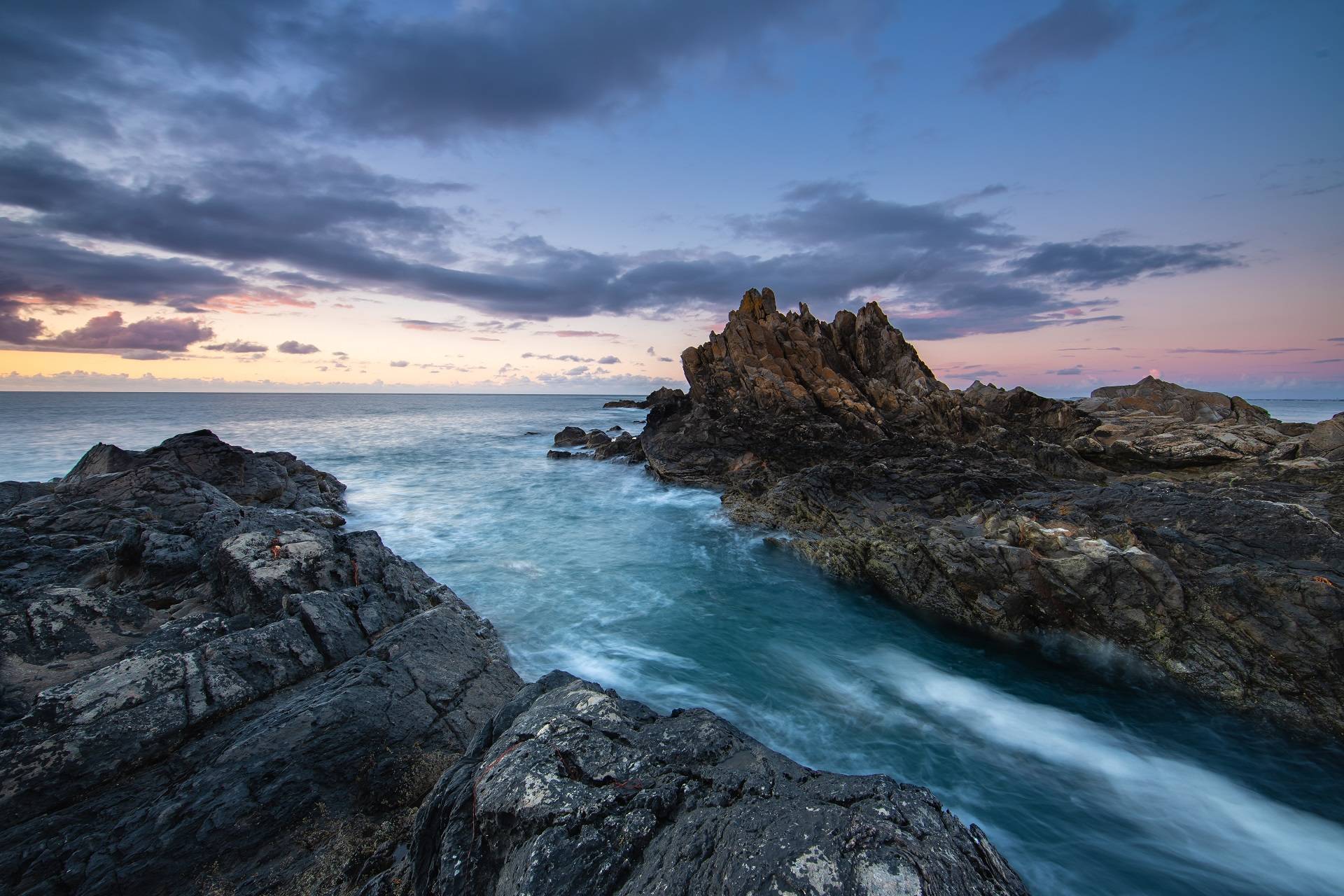 I am going to start where i have left off in my latest blog about Brittany France! The rainbow picture! After this I went to the van and made some dinner! I was hoping for a nice sunset so i could take some long exposure shots at the rocks in the sea!

One of the reasons I wanted to go to Brittany is the beautiful rugged rocky coast! I like to shoot long exposure pictures of water and if there are any rocks in the water it is just way cooler! We don't have rock in the Netherlands, because "we are made out of swamp" And during my first walk along the Brittany coastline, I found out that the water is such a beautiful blue color. I didn't expect that at all!

At the first spot along the coast, the rocky outcrops were not that high and I was able to descend to the water very easily. It did took me a while to get down because it was a long time ago that I climbed like this. But in the end it was well worth it.

The sky also looked very promising, there were some clouds in the sky and the wind was pretty calm! I quickly started looking for a good composition. I immediately came across this plant, but to make a nice picture of it, I needed to do some focus stacking. I also had too little water in this composition, so a beautiful sunset reflection could not be possible here!

The water and the rocks looked much nicer so I decided to climb further!
The rocks in this part stretch out in the ocean so i could isolate the rocks pretty good! Normally, when I do long exposure photography, I am used to that the water is going to be milky withe! This was my first time shooting long expo's in blue water! That looks pretty awesome!

I am in love with this picture! The rocks, clouds and colors I just love it! This was the second picture i took of this composition but because of my fomo I miscalculated the shutter speed and it was way under exposed. And that because i put the ISO on 50...! Because of that the clouds were not right above the rocks any more! I did try to put it trough lightroom and Photoshop but the details aren't that good!

During my photo trip to Iceland in 2017 I learned a trick to work with a shutter speeds of about half a second. With this technique you can capture the movement of the water without a milky glow appearing over it. And that works well in locations where you have a lot of movement in the water around the rocks. Here I have a comparison of two photos with two different shutter speeds. The first is 1/15 of a second and the second is a 1 minute exposure! Now you can see nicely what happened to the water. I wanted to take more pictures like the first one! The disadvantage of this is that you keep clicking and afterwards on the PC you realize how many pictures you took! And on the PC you will see bettere how beautiful the movements in the water are. Editing and sorting the photos took me a lot of time!

In the next pictures you can see what I mean by water movement! I zoomed in on two of these pictures! I love the texture of the water! You can see the movement of the water really good! And if its a very nice golden hour, the reflection on the water would have been awesome to!

In the end i took about 100 pictures like this that evening! I took me a long time to edit them and to pick out the best one's! Here are a couple of them!

Because of the clouds just above the horizon the sunset wasn't that good but I am very happy with the results of these pictures. I staid a while longer to see if the blue hour would be nice! And i was not disappointed! After a while the sky opposite of the sunset was getting a nice pink and purple glow! It was awesome to see!

After the sun was set, the wind also died down. That is why you can see much less movement in the clouds with a relatively slower shutter speed. As you can see in these two photos. The first one is shot with a shutter speed of 0.8 seconds and the second with 8 seconds. The difference is clearly visible in the water, but the clouds seem to stand still! Witch of the two do you like the most?

After these last shots I was pretty done here! It was getting cold and I needed a beer! It was a long but awesome day! Lucky my van was parked close by!
I took this last picture earlier on the day!