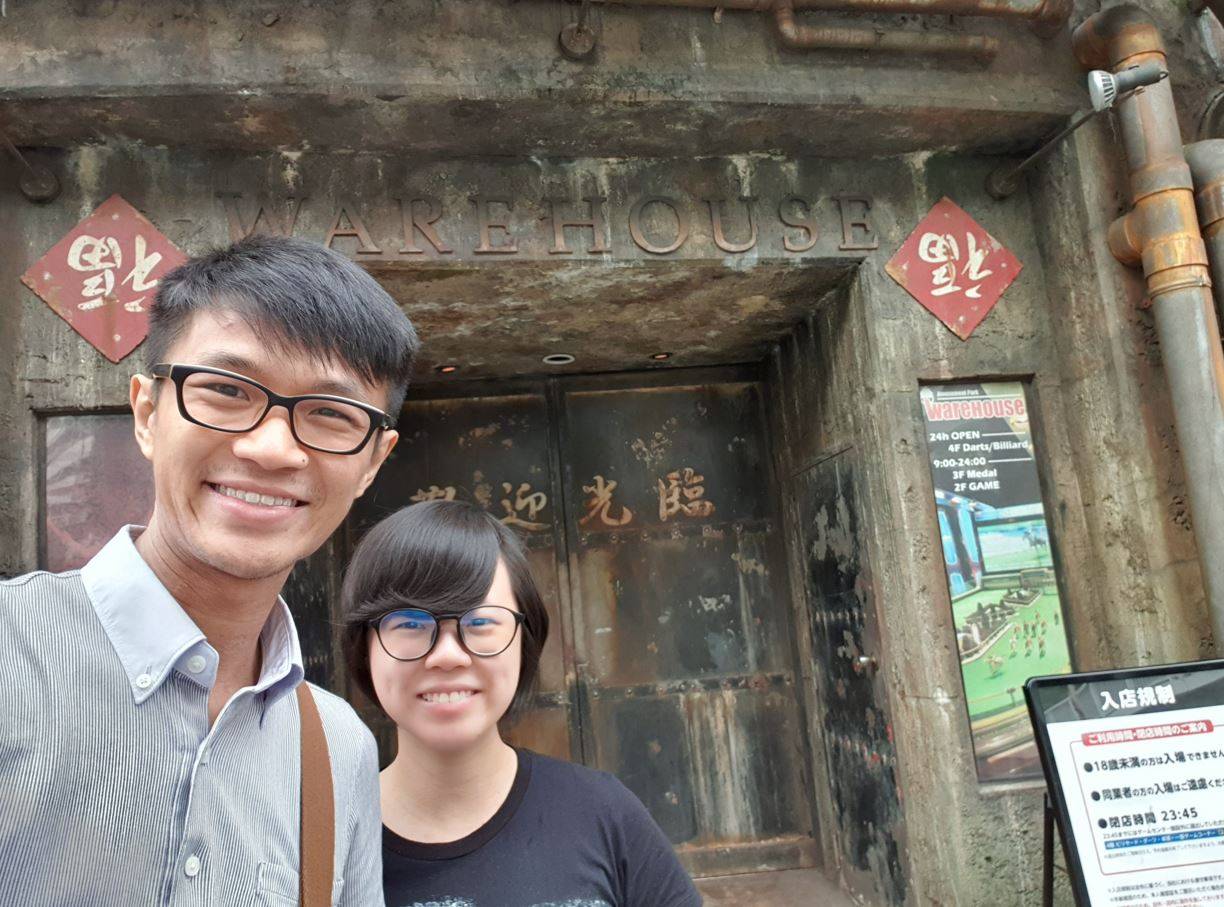 If you missed the last couple of posts, I started recounting my trip to Kawasaki when I went to visit Sean in Japan at the end of May 2019! He was doing an internship with Fujitsu in Tokyo then for about a month or so but we missed each other so much he booked me a flight to go and visit him!

Last week, we started exploring one of the coolest buildings ever - Kawasaki Warehouse, which is a pretty unique arcade and possibly one of the biggest in Japan!

And the reason why it's so unique is because the building and the interior is designed to look worn down and like the former Kowloon Walled City in Hong Kong! It's actually quite creepy looking but somehow the aesthetic works with the arcade machines.

Anyway, the building is 5 stories tall and each floor is really wide too. We barely explored half of it so there was a lot more to see! Lets-a-go!

So the first two levels were the entryway and the arcade, but there were 3 more floors to go! It's pretty interesting since every floor has a different design. Like this next floor was full of casino machines which we couldn't bear to linger in since it was reek of the stench of smoke.

One of the few gripes I have with Japan is that they allow indoor smoking, which makes no sense to me since the smoke can't escape especially in an air-conditioned building. So the smoke stench is just circulating continuously which is awful for making the other patrons susceptible to second-hand smoke.

And with a sensitive nose I couldn't bear to stand in the casino floor for more than 5 minutes. So we hurried to the next floor which was the purikura (aka photobooth) floor!

There were a couple of machines but we could still smell the smoke here and Sean couldn't take it anymore so we left after taking a quick look around. The next floor was the highest and maybe the coolest? First of all there was this mini recreation of Greek god statues that reminded me of that famous Trevi Fountain in Rome even though it doesn't look that similar.

There was this poster of an event going on at the time that I think is related to an anime but it's not one that I recognise.

But the main thing about this floor is that they have tables and equipment for different sports here like table tennis.

And a whole lot of pool tables that looked so cool lighted up! I loved the contrast between the red carpet table tops and the ice blue neon lights below.

There were a bunch of chairs and tables and some extra crane machines at the side too.

At the other end of the floor were a lot of dartboards! They were electric dart board though so the darts weren't sharp and dangerous.

There was even this special dartboard with a fireplace setting that made it look so fancy! I'm not sure what was so special about this dartboard but it was designed just like those old English houses we'd see in movies and stuff.

In line with that fancy English motif, there was this huge waiting room with a mosaic wall and a big fancy red couch with gold trim. It was exactly the kind of couch you'd see in a big fancy old English home.

I felt so out of place just being there let alone sitting on it. It felt like I traveled to a different time period.

This place was connected to the Internet Warehouse which I guess was like an internet cafe? They did serve snacks and food here though.

But there was actually more to it than a bunch of computers like a LAN cafe. There were more machines and dart boards in a big open space.

And a whole aisle of amenities, snacks and drinks! It reminded me of those in hotel lobbies.

There was even a fancy conference room-like place full of magazines and some manga!

I guess it was supposed to be a reading room of sorts but there was only 1 long table in the room and I think it would be weird for strangers to sit at the same table reading manga.

After looking around, we had to go use the restroom so we took the lift down to another floor to find one. We went back to the arcade floor and here's what the lift door looked like! It actually was a cargo lift that they designed to look dilapidated with worn-out posters, some of which might have been authentic from HK!

It definitely did suit the aesthetic and I wonder how they made the background look all rusty and gross. I doubt that the building just looked like that they probably made paint that looked rusty. Man, the effort and dedication behind the design is truly admirable.

But this would definitely be a perfect place for cosplay photoshoots and stuff. Particularly for characters that match this dystopian aesthetic.

Anyway, the entrance to the restrooms looked dark and creepy so we were kinda scared to go in. But we mustered up our courage and I was actually pleasantly surprised! Here's a quick video:

I was so relieved when I opened the door and discovered that the ladies restrooms were actually really lovely! Here's the doorway I guess in case there was a line because the girls' toilets tend to be quite crowded.

I guess they know ladies need bright lights to check their makeup and stuff so they made the toilets nice, which I was more than happy with. Sean wasn't so lucky though since the mens restrooms were in fact dingy looking and dark. But guys don't linger in restrooms anyway so I guess they made it match the dystopian aesthetic for convenience.

We took a few more photos here and there so I could immortalise this place and luckily I did since this place actually closed down only a few months after we visited!

It's quite a shame that such a unique building has been closed up but I doubt it would've survived the covid period anyway so I think it was for the best. We were really lucky that we visited when we did though because this place is definitely one that I won't forget for a long time.

Sorry for the blurriness but it was quite dark and I forgot to give some time for my phone to focus.

After we looked around and basically explored the whole building, we were content to leave. It was also pretty noisy and crowded at the time and since Sean's apartment wasn't too far away we could come back another day.

Unfortunately since it's closed I can't recommend that you visit Kawasaki Warehouse anymore, but it was definitely a very memorable place for sure. I'll never forget this building and I'm so glad Sean brought me here!

But I think that's gonna be it for this post! Hope you enjoyed our trip to Kawasaki Warehouse!

We actually did come back one of the weekdays when Sean managed to get off work early and played a few more arcade games and even tried table tennis, pool and darts! It was my first time trying all those sports and I think darts was the most interesting. I even got a couple of bullseyes too! Hopefully next time they'll reopen of something but in the meantime, we have our memories from this trip.

To find out more about me, check out my intro post here!